Skip to content
Cork Juvenile Championships
The younger athletes in St Catherines took part in the Cork County Track & Field Championships, held in CIT, on Sunday the 5th of May.
All of our competitors did themselves and their club proud.
In very warm and humid conditions, the club coped with a very full programme. Many of our competitors competed in more than one event. They attempted various track events like sprints, hurdles and middle distance while also trying field sports like the turbo javelin, the shot putt, the high jump and the long jump.
As a small club and with limited resources, and with most of our success confined to cross country running, we were hoping that the boys and girls would give it a good go and that they did. The younger children had up to a hundred children vying for a spot in the sprints finals so it was encouraging to see the likes of Oscar and Ryan getting through to the semi-finals and only just losing out on a final place by inches!
Cian Dunning and Conor Hayes performed very well at the High Jump; Cian was very unlucky not to come away with a medal, being beaten on countback for a bronze.
Sam Dunning did bring home the silverware, not one but two silvers in the 100 and 400 metre races in his age category. All those practice runs in the field were worth it in the end!
Well done to all the boys and girls like Ellie and Lucy Barry, Conor and Ciara Hayes, Darragh and Conor Ronayne, Tegan Murphy, Oscar Cummins, Neesha and Ryan Whelam, Sarah O’Connell and Charlie Nicholson. Hope I haven’t left anyone out .
A special thank you to the coaches for figuring out all the times of the events and making sure the kids get to their starts.
The 2nd Sunday of the Championships is on next Sunday so good luck to everybody taking part.
Midleton 5 mile
Well done to all members who crossed the line in Midleton on Thursday. On what was a warm night the rolling hills of Midleton produced some very fast times. We had 4 runners break 30 mins. Well done to Mike Byrne, John Beecher, Trevor Geary and Noel Early who put in amazing performance. Roisin Ronayne was the 1st woman member home. You can check out all the results here
East Cork Road Championships
We had large turn out for the East Cork Road Championships held in Ballynoe on Thursday April 25th. The mens took on the 5 mile distance while the women did 3k. Both involved multiple climbs which was tough on the legs. But great news came out of it and that was that our mens team came home with the Mens Team gold medal. The 1st four from the team were John Beecher, Trevor Geary, Chris O’Connell and Keith Barry. Well done to all our members who took part. You can check out the results here 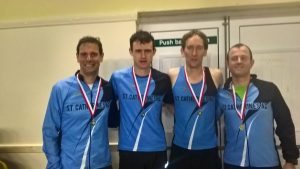 Cork Road Championships
Back in March we competed in the Cork Road Championships in Castlelyons. And we were finally able to present our F45 team with their bronze medals. Well done to Siobhan Hayes, Noreen Daly and Geraldine Sheehan and their great performance on the day which was rewarded with these county medals.
Limerick Marathon and Half
We had some members travel to Limerick on Sunday for the full and half marathon. Colin Conningham took on the marathon and managed a negative split to finish in 3:59:07. That was a very consistent run from Colin who went through half way in 1:55:50. Keith Barry who has had some great results recently broke 1:30 for the 1st time with 45 seconds to spare and Paddy Ryan who finished in 1:48:58 which was a great result considering he wasn’t feeling well on the day. Brid Barry did the 6 mile and finished in 1:05. Good to see members out in all the races.
Posted in Uncategorized.