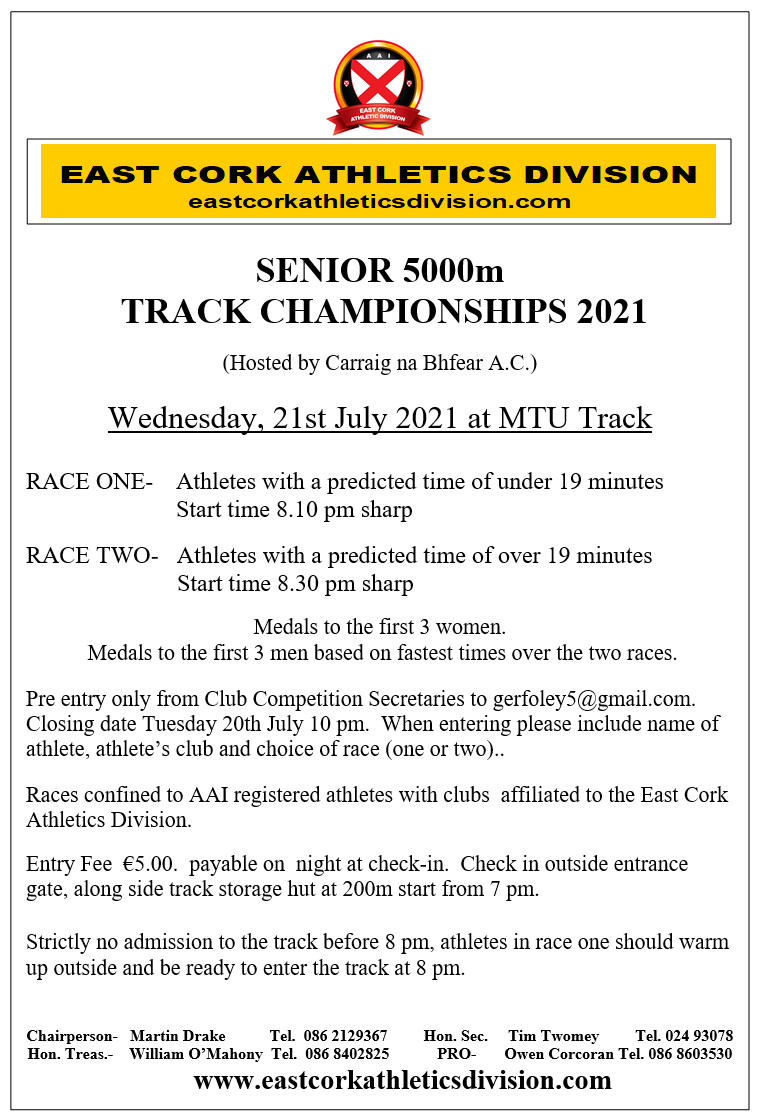 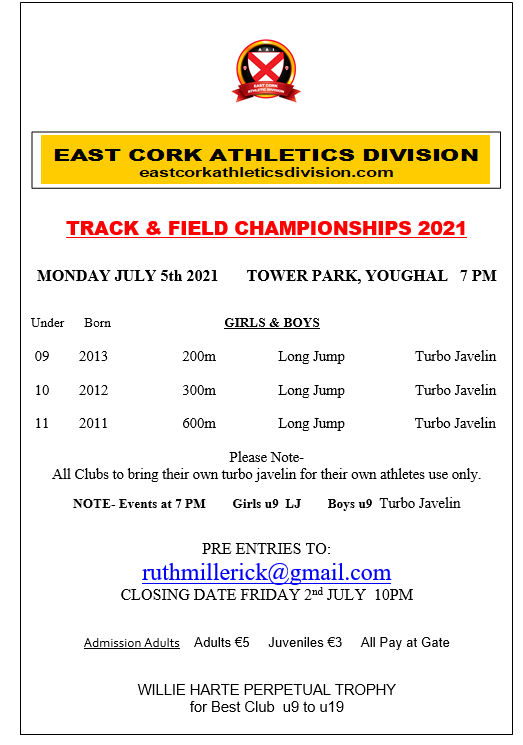 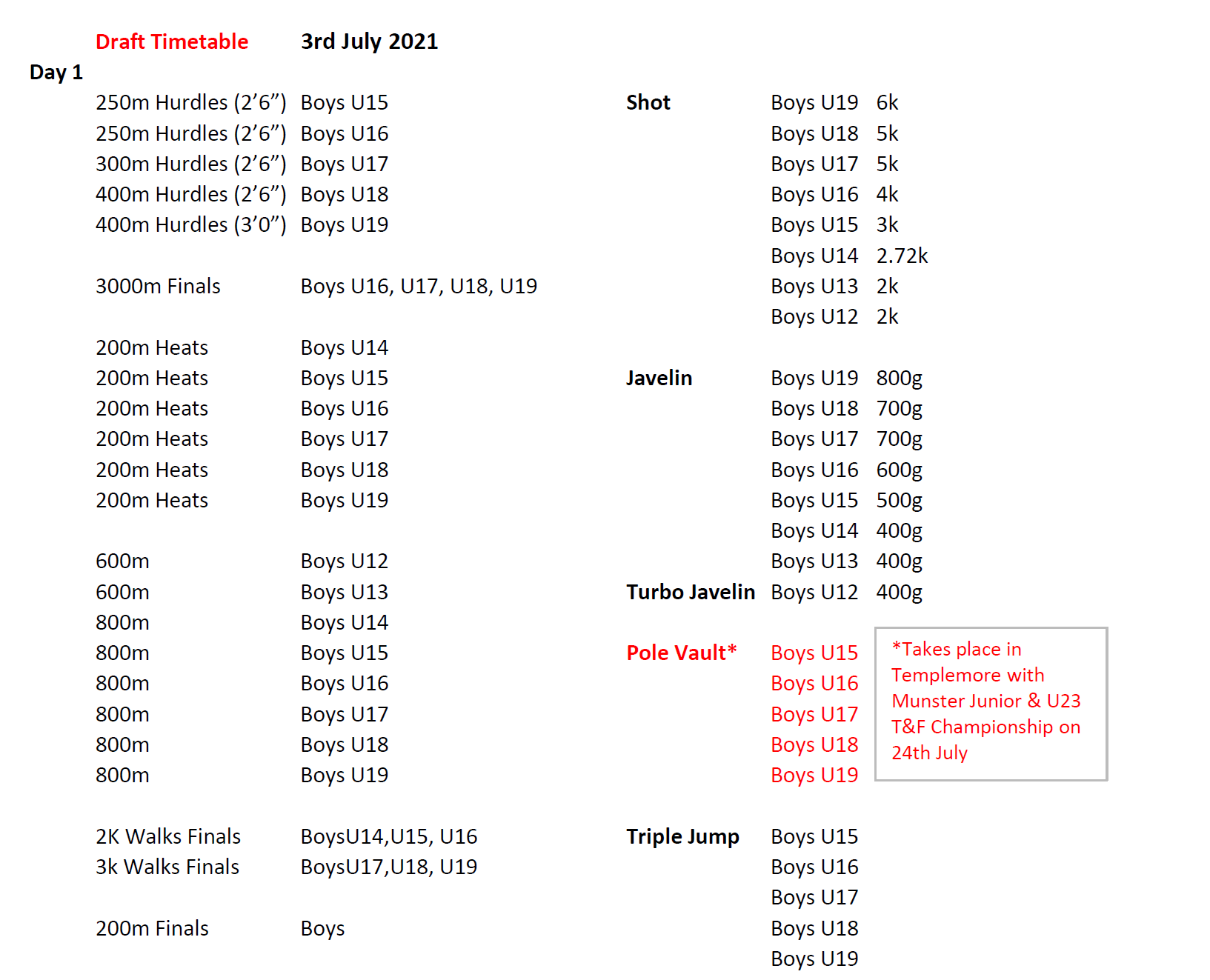 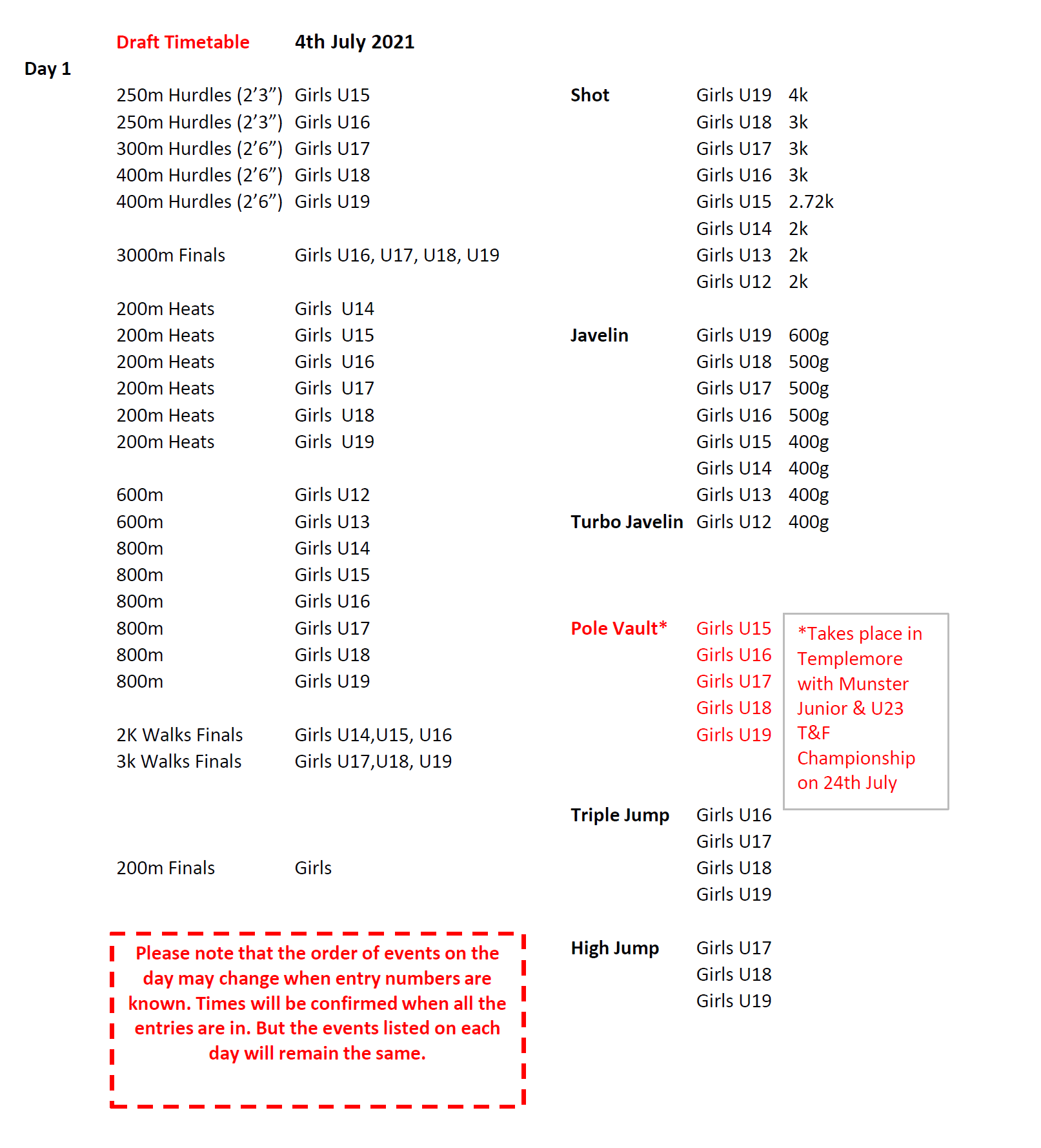 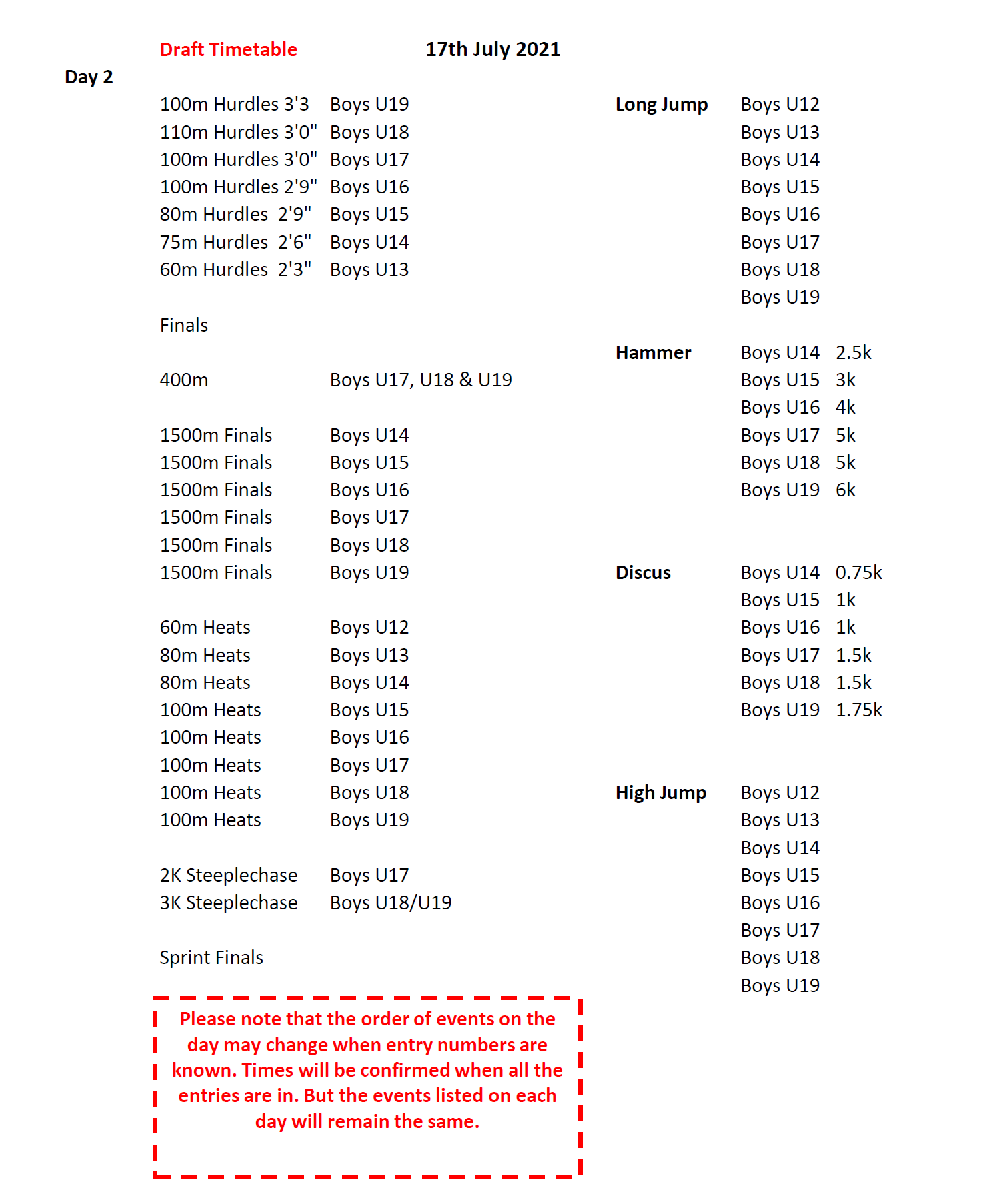 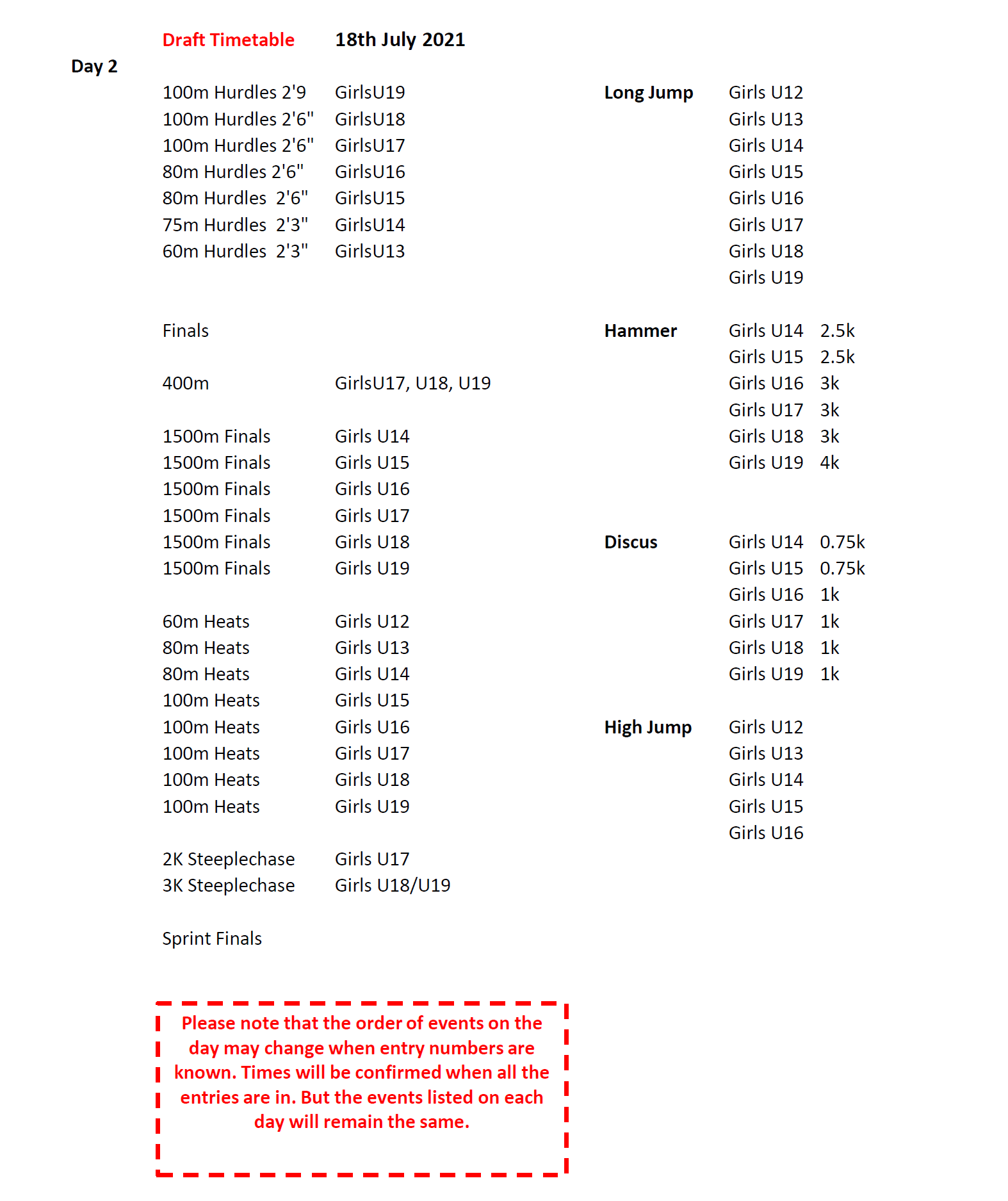 We had 3 members make the long drive down to Allihies for a tough 5 mile race. There were plenty of hills to battle up but it was worth it for the views of the coast line. The sun was shining for the day which meant once the race was done a trip to the beach was needed to cool down. It was great to have a road race to go to and Beara AC put on a great event. There are 2 more races in the series and we hope to see them stay on the calendar. Jonathan Kenneally was 13th overall in a time of 33:19, Roisin Ronayne was 7th woman home and 1st in her age category in 39:19 with Catherine Clancy close behind in 40:39 also 1st in her age category.

Following on from last week where our club hosted a very successful event, we had another great day out in Whites Cross, this time being hosted by Carrignavar AC.

I am delighted to report that the club members had a strong turnout and their hunger for success was very evident from the start.

On a gloriously warm summer’s day, the conditions were set up for fast running on a dry surface. There were several jumps on this course which needed to be tackled with courage and all the athletes managed to do this very well indeed.

On her competitive debut for the club, Mary_Jane Casey stormed off in the under 9 girls race and won the 750 metre race nearly half a field between her and second place. Brilliant stuff .

Not to be outdone, Aimee Kearney also dominated her under 11 girls race and led from start to finish, a very impressive performance again.

Our boys must  have taken note as their team also tackled their race with serious intent. Conor Ronayne won this race  in superb style and was followed home by Kenneth O’Connell in 4th, Tadgh Walsh in 8th, Oscar Cunningham in 16th, Noah Keane in 25th and Adam O’Connor in 27th. These boys ran strongly as a team and won gold medals for first overall. Great stuff, lads. Keep it going !

Our under 13 girls tackled the 2,000 metre course with real grit. In a large field, there was a very exciting end to the race where Charlotte Norman won a sprint finish to get third place . She was followed by Ciara Hayes in 9th, Ella Higgins in 10th, Ciara O’Regan in 12th, Maeve Fitzgerald 24th and Amy O’Connell  in 27th.

The under 13 boys team tackled the same course in similar fashion. Darragh Ronayne had a great battle upfront, like last week, but lost out on first place but held on strongly to secure second place. He was followed by Alan Cotter in 4th spot, James O’Connor in 9th and Sean Walsh in 14th. Again, a very strong performance amongst  formidable opposition and the team finished second overall. Silver medals all around, lads.

Ella O’Connor was our sole performer in the under 15 girls over 4,000 metres and ran well to finish in the top ten.

In the under 15 boys, Conor Hayes had an exciting battle upfront with his his old rival Aiden Maher,from Carrignavar and they entertained us no end for all of this race with some classy running. Conor finished second in a very commanding performance.

In the under 17 boys race, Stephen Roche made his debut and ran strongly in the first lap before settling in the middle of the pack but finished strongly. Well done, Stephen on your first start.

Sinead Goss ran in the under 19 girls race over 4,500 metres which was run with the Womens Novice race. Sinead finished in the middle of her group while Sara Barry and Catherine Clancy finished midway in the Womens, Sara in 14th and Catherine in 18th. Well done ladies.

Well done to all our athletes and coaches for another great day out.

You are a credit to your club and families.

Hope to see you all at the County Championships, to be held in Riverstick very soon

It  gives uz great pleasure to report on a great day out at the East Cork Division Cross Country Championships hosted by St Catherines  AC. At one stage, not too long ago, we weren’t sure whether there would be any cross-country season but working under new recommended guidelines, the club and the Divisional officers put on a very successful event.

The championships were held once again on Frank Hayes’s farm and the course was in fantastic shape, especially so as the sun came out and with it being  dry underfoot, it was set for ideal running conditions.

Numbers were down in some of our under age races, but this did not  detract from the quality running on display.

Our opening races over 1000 metres were for the under 10 athletes. Lara Byrne was our sole participant in the girls and finished a highly creditable 5th place.

The under 10 boys had 5 running and what a performance they put in to secure first place to win the team medal.

Kenneth O’Connell put on a commanding performance to win the race by some distance to be followed by Oscar Cunninghan in 4th, Zach Pyne in 8th and Noah Keane in 9th spot. Really great stuff lads!

The under 12s races were over the 1,500 metre course which featured a fair few drags, up and down. The girls and boys performed very well through this challenging course. The seven strong girls team secured 2nd place overall which is a fabulous achievement, Ciara Hayes led the team home in 6th, followed closely by Ella Higgins in 7th, Aimee Kearney in 8th, Ciara O’Regan in 10th, Amy O’Connell in 20thAnnA Byrne in 32nd and Maebh O’Connell in 34th. The team coaches did well making sure they packed well as a team. Great stuff, girls! Silver medals on their way!

The boys race was  a very hard fought race up front and Conor Ronayne put up a great battle before settling for 2nd place and silver. Ryan Whelan finished strongly in 9th spot and Ryan Molumphy cam home in 26th. Well done, lads.

Our under 14 girls of Ellie Barry and Sadie Linehan tackled the 3,000 metre course with their usual courage and tenacity. Both girls finished strongly in the last few hundred metres to pass fellow athletes to finish strongly, Ellie in 12th and Sadie in 15th. Mighty stuff, girls!

Our sole representative in the under 14 boys was Darragh ronayne. Again, not for the first time, he found himself in a ding dong battle upfront and having lost the battle for first place held off the field to secure second in a fine sprint finish. Brilliant tactical running as always, Darragh. Good amn yourself.

Our next competitors were Sinead Goss in the under 18 girls and Sara Barry and Natalie Nicholson in the Junior Women. This race was rac together and what a display our girls put in. Natalie led out the field and kept pulling away from the field the longer the race went on. She won by some distance from her teammate Sara Barry in second spot. Sinead Goss finished in seventh spot overall in her first competitive outing for the club and picked up a Junior team medal for her efforts. The Junior Women secured a silver team medal.

Lastl but not least, the Ladies and Mens events. Our 2 Ladies in the Masters over 4,000 metres were Catherine Clancy and Agnes Hurley.There was a big field of nearly 50 runners , one of which was Ireland and Ballymore-Cobh’s very own Sonia O’Sullivan, who was chasing an East Cork Senior medal, one of the very few that she hadn’t picked up in all her years competing and entertaining  us. Great to see her back competing in cross country in her beloved county.

Catherine came home in 24th place,and Agnes in 40th on her debut for the club. (And Sonia finished 10th).

The mens race over 4 laps of the 1,500 metre course was a fast race won by Kevin O’Brien from East Cork. In a very large field of 60 athletes, our men put up a great show and they were led home by Mike Byrne in 20th, closely followed by John Beecher in 22nd, Chris O’Connell in 33rd , Brendan Hickey in 34th, Kevin Hayes in 36th, John Mulcahy in 39th, Kieran Harte in 51st and Kieran Murphy  57th.

It was satisfying to hear from the other clubs how well organized the event was, especially the new incentives like the Call Area and the new labelling system which speeds up the recording of results.

It’s so important to keep all of our athletes active and to have them and their families representing our club at these events. Long may it continue.

Hope to see you all the second East Cork Cross Country In Carrignavar next Sunday.

Well done to everyone who took part. It is not easy to get out on your own and do it