The following are the results of the Summer Series 5km event which took place tonight in Shanakil, and a link to previous results and overall standings to date

The following are the results of the Summer Series 5km event which took place tonight in Shanakil, and a link to previous results and overall standings to date

This is always a fun night and a great opportunity for people to try their hand at T&F in a relaxing atmosphere as well as giving the more seasoned track athletes a chance to see how their training is going.

You can also get a taste of what to expect in the following video courtesy of Carraig na bhFear AC: Video

There are events from 100m up to 3000m for Junior, Senior and Masters Men and Women. 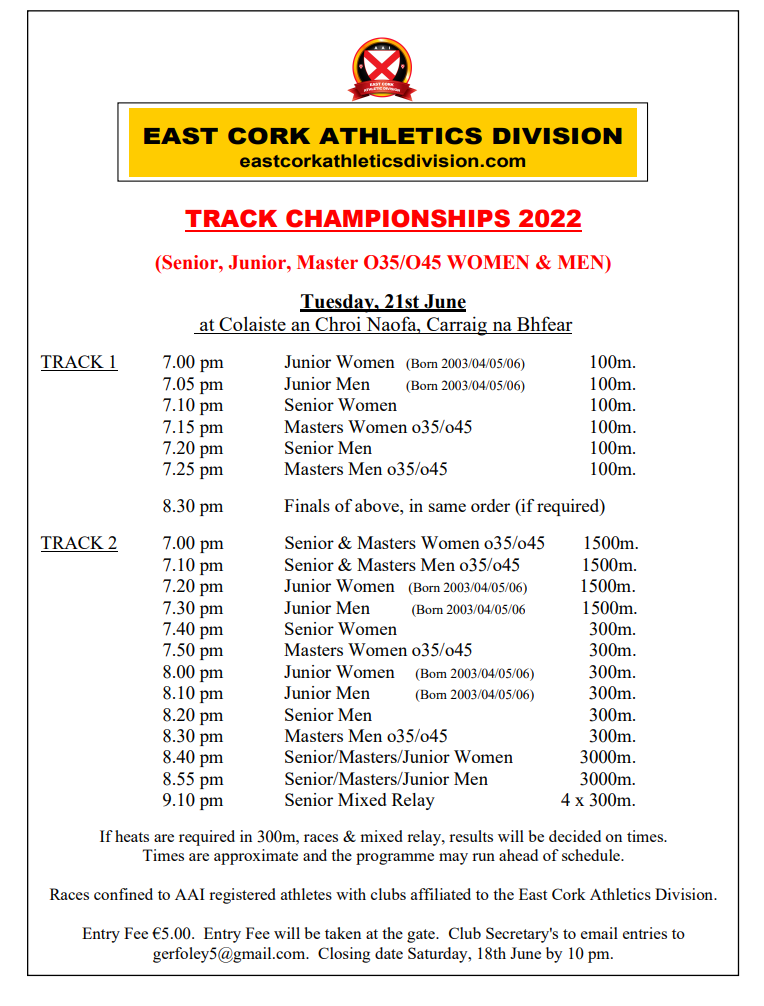 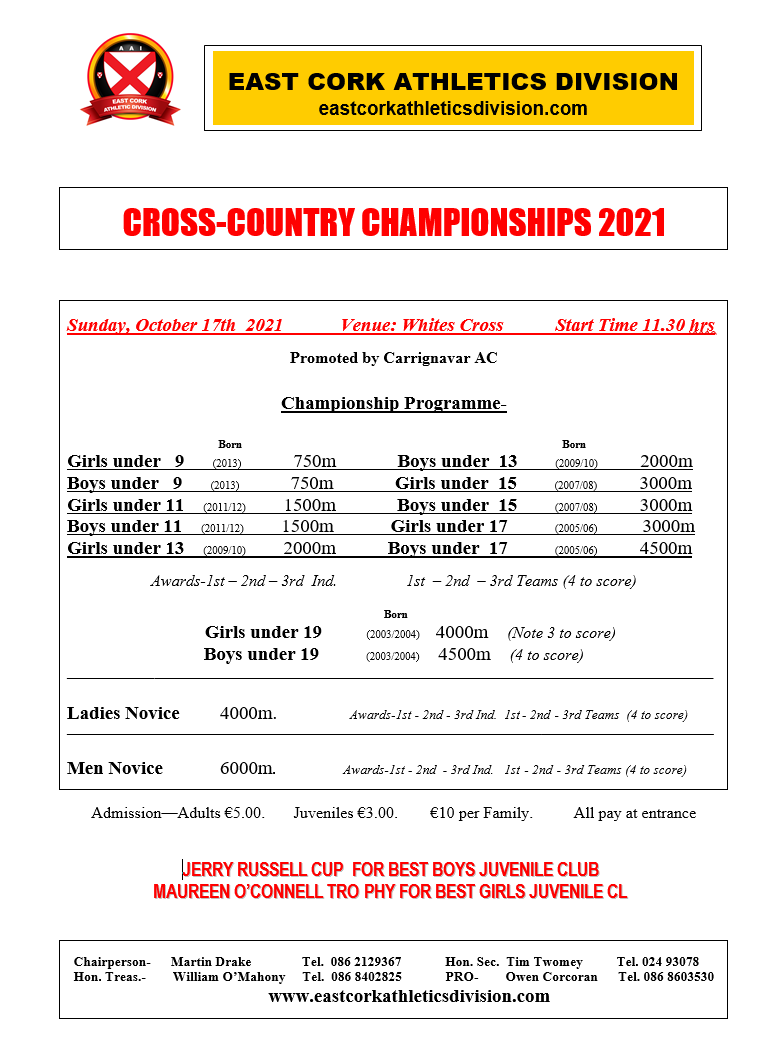 The County Cork Cross Country Championships for  Juvenile relay  teams and the Novice and under 23 adult races were held in Riverstick on Sunday, the 26th of September last.

On a very wet and windy day, the clubs from all over the county battled with the conditions to compete for that coveted prize, a county medal.

St Catherine’s AC had three juvenile teams competing in the relay races, everyone running 500 metres for their leg of the relay race.

The boys under 10 team of Eoin Ronayne, Tomas Kiely, Oisin Feeney and James Beecher had a tremendous battle with the local club, Riverstick/Kinsale but lost out and came home in fourth spot. Great effort for these lads in their first year racing. Hope this experience will spur you on for the next race.

Our under 12 boys are a very strong team, having won the East Cork’s last week, and they lived up to their reputation by beating two formidable rivals, Midleton and Leevale, into second and third places. So gold medals all round for Conor Ronayne, Kenneth O’Connell, Oscar Cunningham, Bill Leahy & Zach Pyne(sub). Fantastic achievement, boys and well deserved for all the training and hard work put in.

More success in the under 14 boys race. This time, our lads beat Midleton but lost out to Leevale, so had to settle for silver medals. Great team performance from Darragh Ronayne, James O’Connor, Ryan Whelan and Cathal to compete so strongly, especially with these clubs, well known for their sprinting prowess.

In the adults races, we have a new county champion!

In the Novice womens race, Sarah Mulcahy came home first in the under 23 category event. What an outstanding achievement. Sarah has been in good form recently so this victory is well earned.

Our other competitors were in the Novice mens race over 6 kilometres and the team coped admirably with the conditions to finish 5th overall for the team. Jim Harty, in his first cross-country race for the club, came home in 16th spot, just behind the Olympic champion,Paul O’Donovan who was running for Leevale. Prestigious company, indeed! Jim was followed by Trevor Geary, Brendan Hickey, Kevin Hayes, Kieran Harte and Kieran Murphy.

Great day out for the club and yet again, heaps more medals for our athletes.

Our next day out is on this Sunday, the 3rd of October, where the Senior County and Even age Juvenile Cross Country Championships will be held in Carrigadrohid.

Hoping to see you all there. 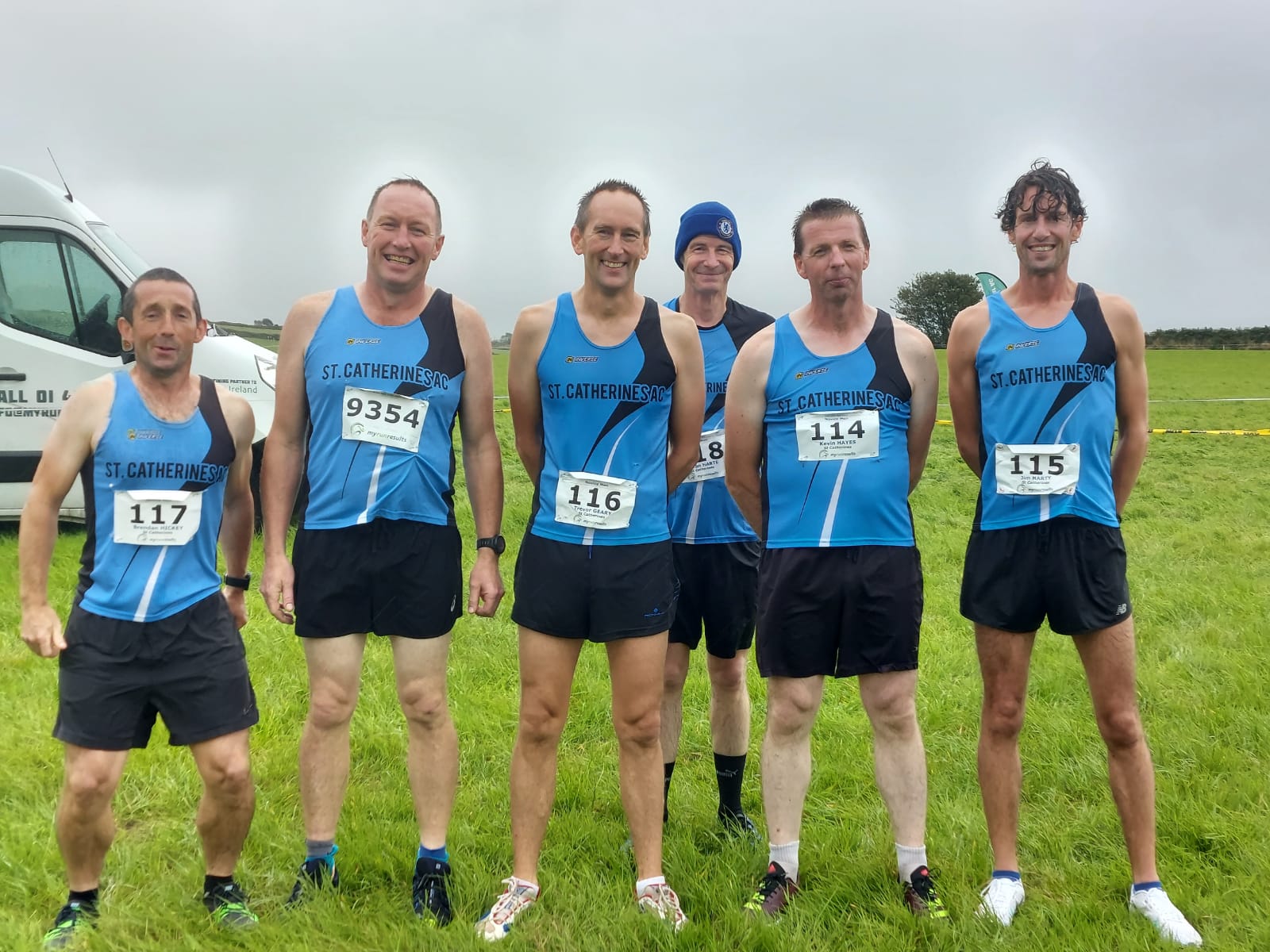 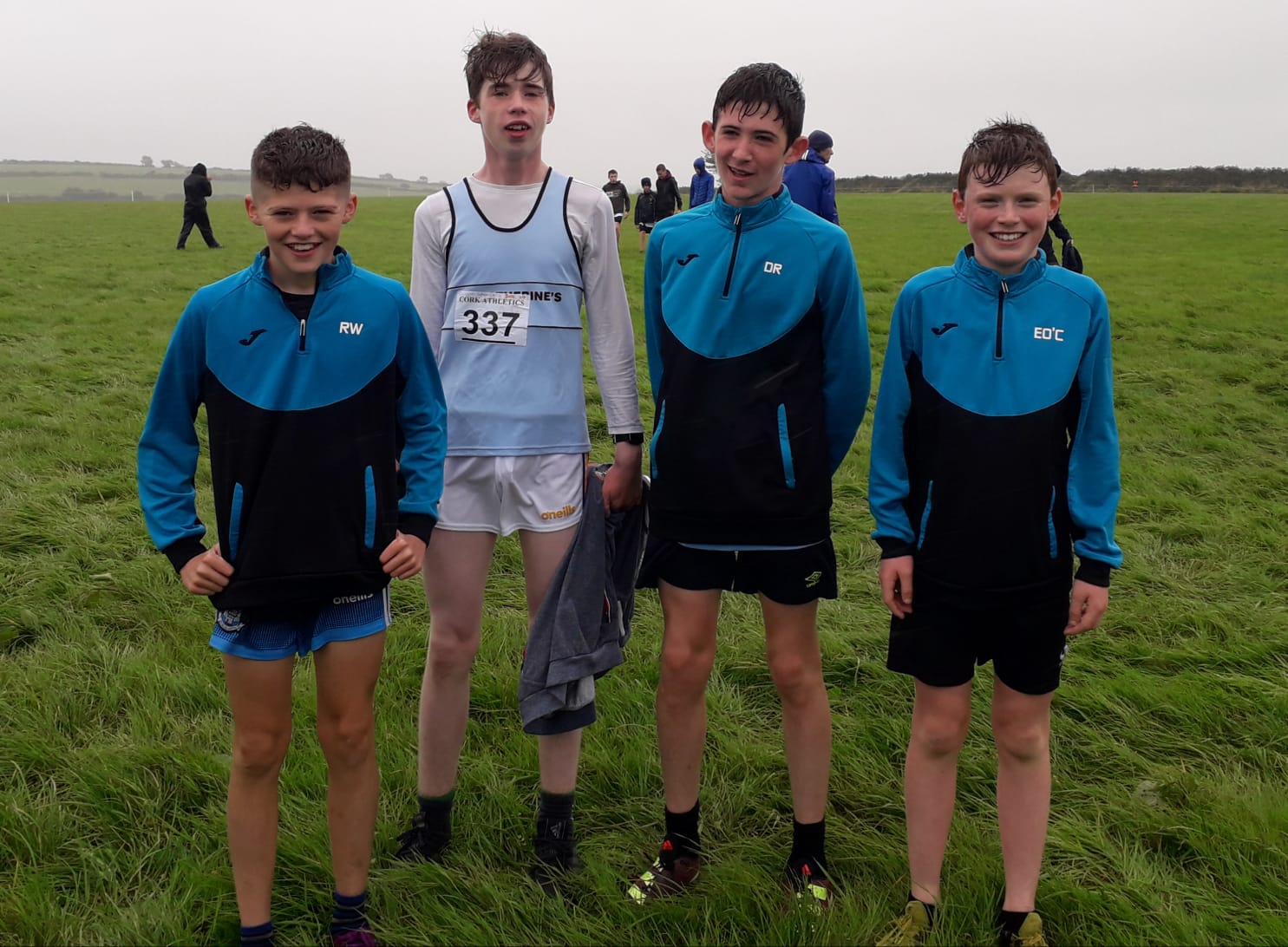 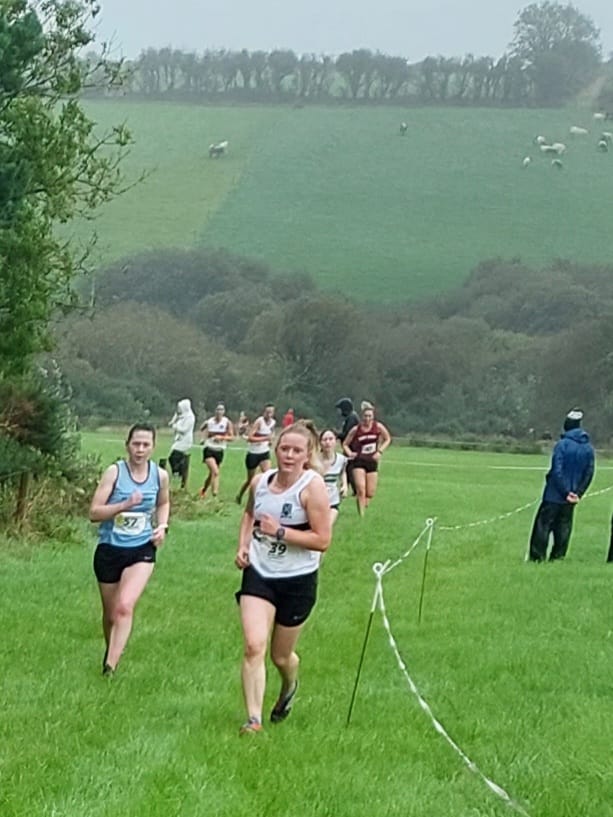 It is a great honour for our club and community to be hosts to these championships.  It is to the credit of the club officials and the assistance and support of the club members that we are able to manage such a prestigious sporting occasion. The  event was held on the lands of Frank Hayes yet again and the new course was in superb condition for a great day’s racing.

Our juveniles excelled and we ended up with fistfuls of medals.

The under 10 boys had a similar race. Alex Keane had a superb race to finish second, closely chased home by Eoin Ronayne in third spot. Their teammates Oisin Feeney, Adam and Cillian Fitzgerald, Colm Geary, Tomas Kiely and Ciaran O’Connor packed well and the team finished second overall. Well done to all the under 10s and their coaches.

The under 12s girls race was over 1,500 metre and Aimee Kearney led from the start to the finish, putting on a masterful display. Lara Byrne put on a great performance finishing in the top ten.

In the boys under 12s, we had yet another outstanding performance by our club runners. Conor Ronayne and Kenneth O’Connell took off from the start and put some distance into their rivals. Conor came home in first place, followed by Kenneth in second. Oscar Cunningham finished in the top ten, followed by Bill Leahy, James Geary, Zack Pyne, Noah Keane and Adam O’Connor. Great stuff lads. Ye deserved your team gold medals. Brilliant stuff!

In the boys race, Darragh Ronayne was always at the front and ran a fine tactical race to finish second. James O’Connor had a great second lap and finished strongly coming home in fifth place.

The girls under-16s were Sadie Linehan and Ella O’Connor. They were both running two laps of the course and finished comfortably.

In the boys race, Conor Hayes was racing against his great rival and friend, Aidan Maher from Carrignavar and this time Aidan won the duel, leaving Conor in second place. Cian Dunning came home a mighty fourth and Charlie Nicholson was the third boy home, securing a team prize for third place overall.

That is nine individual medals, 3 Golds, 6 silvers and a bronze  and 5 team medals if my counting is correct. Stand back and take a bow, boys and girls. Brilliant display!

Fantastic achievement to all of the athletes for making this such a special day. 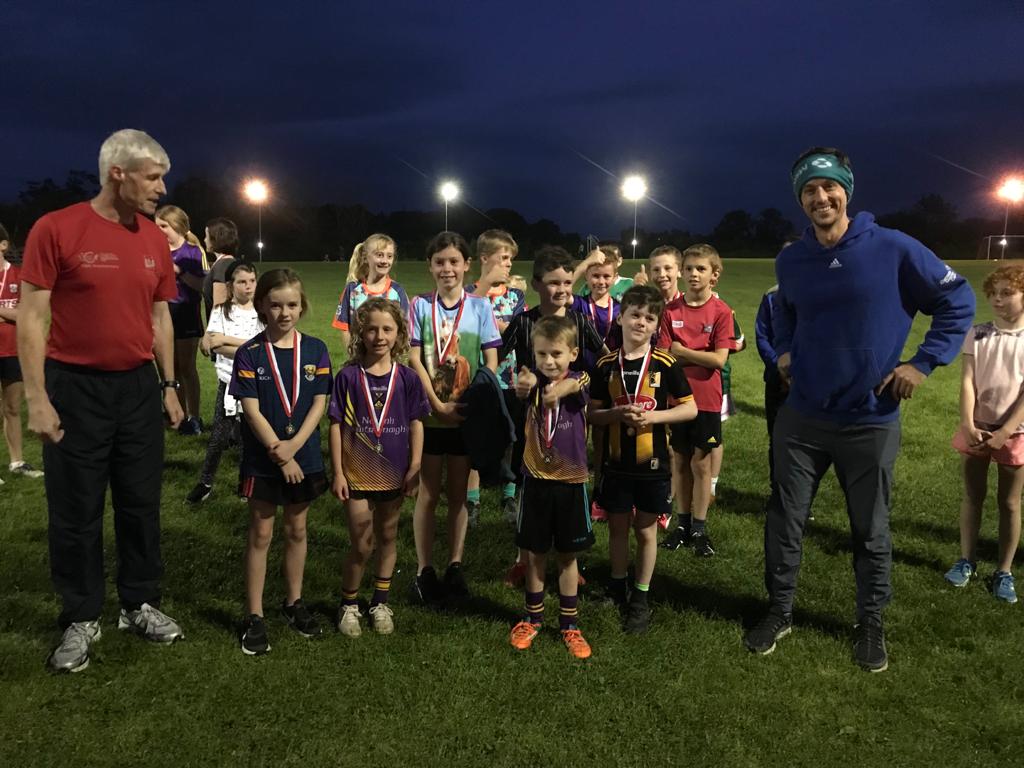 Hope to see you all at the County Cork Championships, which are being held in Riverstick on the 26th.

All Senior/ Master athletes must pre enter through their respective club competitions secretaries. Entries should go to Frank before Thursday 9pm.  No Late Entries

Only Athletic Ireland registered athletes whose club are affiliated to the East Cork Division may compete.

Details to be forwarded are:

All competing athletes must make themselves familiar with and abide by Athletics Ireland return to competition protocols.  If any athlete, coach, parent or guardian has any covid like symptoms or feels unwell under no circumstances should they arrive at the venue.

No change can be given on the day so exact money only to be placed in an “honesty bucket”at the check in desk.

A public address system will be in operation to call athletes to their races.

Toilets will be available.

Appropriate cleaning products will be provided and all users will be asked to sanitise before & after use.

Medals for the first three individuals of each race will be on the podium for collection.

Team medals will be forwarded through the club competition secretaries if not available on the day.

After an athlete’s race we ask that they leave the venue as soon as practicable.

Athletes/spectators must bring their own refreshments with them. No bins will be provided so all rubbish must be brought home by those that would like to bring a picnic.

Recording of athletes at finish:

As we can no longer give out tickets at the finish line – we ask each club to provide a stick- on number to all of their competing juvenile athletes marked with their relevant club number. Each juvenile club will be allocated a number and all club athletes must wear that number as follows:

It is very important that each club coach knows their first four athletes in each race as our recorders will only record a club number and not a name.

A separate recording procedure will be in place for the senior/master athletes who must pre enter in order to compete.

The 2021 County  Juvenile Track & Field Championships were held in CIT grounds over the last two weekends.

Fair dues to all the girls and boys from St Catherine’s AC who participated in all the events. Families have been going from pillar to post getting the boys and girls to all their various sports and activities so we’re delighted that people can find time to turn up for the athletics and perform to the best of their abilities.

The 13 to 16 year old boys and girls competed two Sundays ago and they took part in the various running races over the distances from  80, 200, 600, 800 and 1,500 metres. Sarah O’Connell got pipped for third place in the 200 metre dash, coming home fourth. Ciara Hayes ran the 80 metre and 600 races. In the Boys events, Darragh Ronayne finished third in the 800 metre race while Charlie Nicholson came home in fifth spot in the longer 1,500 metre race. Cian Dunning raced well to finish second in the boys under 16 200 metre sprint.

The field events were more successful as Charlie finished second in the under 15 boys Long Jump, Maebh finished seventh in the under 13 girls Javelin  while Cian took the honours, winning the under 16 boys Javelin, throwing over 33 metres. Great stuff!

Last Sunday, the younger boys and girls from under 9 to 12 years old took part in their respective events. In the under 9s, Eoin Ronayne, Philip O’Callaghan, Leah Pyne, Tomas Kiely and Ciara O’Connell ran the sprints and tackled the long jump. Eoin won his 60 metre sprint, the fastest on the day at 10.35 seconds and came home second in the 300 metre race. Ciara came third in her 300 metre heat but topped it all by winning the long jump reaching over 3 metres. Well done, Ciara.

In the under 10s,Oisin Feeney did well in the javelin and the 500 metre race.

In the under 11s, Lara Byrne came home in fourth spot in her 600 metre race. Great race, Lara.

The boys taking part in the long jump and the running races were Adam O’Connor, Zach Pyne and Kenneth O’Connell. Kenneth came second in his 60 metre dash but saved the best for his 600 metre race, finishing in the fastest time of the day  at 1 minute 54 seconds.

Magnificent effort from all our juvenile athletes and we are hoping for more of the same this coming Sunday, the 19th, when our club will host Day 1 of the East Cork Cross Country championships. This will be held once again on  the farmlands of Frank Hayes and so we are hoping for another great race day there.