Information available at the link below:

Juvenile County B Championships taking place next Sunday 26th May in CIT. Entries to Franks or Rachael by Monday evening.

Information available at the following link: 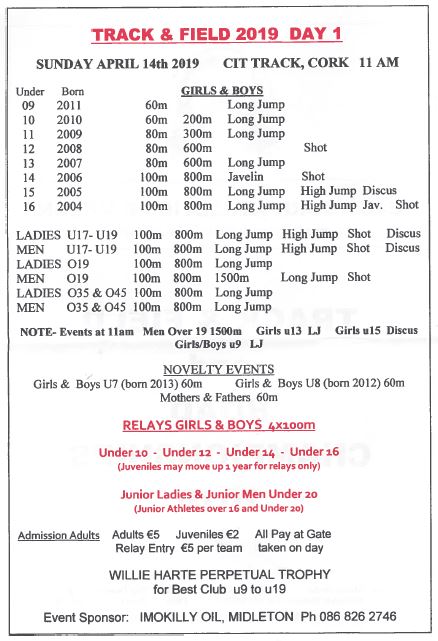 Little Athletics joins Juvenile training at Conna pitch 7-8pm Monday 1st April. Please be patient as car park will be busy. NO PARKING on the road outside sports field.

Our club members, young and old, gathered together to celebrate our athletes achievements for the 2018 calendar year.

There was a great turnout from the members and their families at Conna Hall on Saturday night last.

Awards were presented for Juveniles and Adults.

Kevin Hayes, chairman of the club, remarked on the increase of participation by athletes of all ages and the increase in membership, particularly the Little Athletics section, which resulted in more coaching requirements and more parents becoming involved in the running of the club.

Our guest speaker was Martin Drake, chairman of the East Cork AC Board, who remarked on the great ambition of the club over the last ten years, and his own personal admiration for the youngsters over the last ten years, who have been dogged in their pursuit for silverware. He also recounted various occasions at County, Munster and All Ireland races where he would take great pride in seeking out the St Catherine’s jersey in amongst all the other clubs and roaring on the runners in turn.

The most improved female juvenile is Ally Mulkerins.

The most improved male juvenile is Conor Hayes.

Dan McCarthy took great pride in presenting the award to Laura who not only had another superb year in athletics but also had the most incredible achievements in Camogie where she won 4 All -Irelands at schools, minor, intermediate and senior levels. He stated that her efforts reflected greatly on the parish and showed how a small club like St Catherine’s consistently punched above its weight.

The female adult ‘Athlete of the Year’ award was won by Frances Barry.

The male adult ‘Athlete of the Year’ award was won by Mike Byrnes.

The under 19 girls team were also presented with the County Trophy for winning the under-19 cross country County title in Carrignavar. The team is Sarah Barry, Laura Hayes, Natalie Nicholson, Sarah Mulcahy and Caoimhe Hayes. In fairness to these girls, who have given great service to the club, they made a special presentation to their coach, Frank Hayes for all the great effort to turn them into such a crack outfit.

The evening was rounded off by a visual display of the athletes throughout the year, followed by a fine spread of sandwiches, pastries and cakes.

Thanks to everyone who helped out to put together such a memorable night.

The Club AGM will be held on Wednesday 12th Dec at 8pm in Conna Community Centre. Everyone welcome to this very important club meeting.