Registration for all athletes takes place this Wednesday 8th January from 8-9pm in Conna Hall.

All athletes must be registered in order to train or to take part in any athletics events representing the club.

Our next to last outing  for cross country running was held in Carrig na bhfear on Sunday, the 8th.

The stormy conditions meant numbers were low overall but I am glad to say that St Catherines still turned up in good numbers and we had a great showing.

Lara Byrne came second in the under 9 girls which was a super performance over the 750 metre course. Well done , Lara!

The weather deteriorated very sharply after this and the next couple of races were held in driving rain. So fair dues to all the boys and girls for not only starting but also completing their respective races.

Oscar Cunningham came third in the under 9 boys. Mark Geary followed in 7th, Noah Keane in 10th and Adam O’Connor in 13th place. Fabulous teamwork, lads. Second place in the overall team and silver medals for all four boys.

The under 11 girls team also put on a brave face heading into the worsening conditions competing over the 1,500 metre course with big and small jumps . Aimee Kearney had a great battle upfront and duly came home third. She was followed by Ciara Hayes in 5th, Anna Byrne in 16th, Maebh O’Connell in 20th and Grainne Linehan in 25th. This team also captured silver, coming second overall. Great stuff girls!

Ryan Whelan and James O’Connor took on the under 11 boys race. Ryan had a great sprint finish and picked up a bronze medal for his efforts.

The under 13 girls were Ellie Barry and Ella O’Connor. They ran really well coming in 7th and 10th overall.

Darragh Ronayne and Charlie Nicholson also had strong performances in their under 13 race. Darragh came third and Charlie in 5th. Yet another medal for Darragh this season.

Last but not least, the most anticipated run of the day was for Doireann Hayes in the girls under 17s race. Doireann has been training hard the last few weeks and she had a solid run taking the field around for a few laps before she was reeled in, in the last few hundred metres and was just pipped for a medal, coming in fourth spot. Better luck next time, Doireann.

Mighty stuff everyone. Handfuls of silver and bronze medals for the club. Very proud of each and every one of ye.

Winter is here with a blast and we had a seasonal day out at the Munster B’s Championships, held in
the Turnpike at TwoMileBorris in Tipperary, last Sunday, the 1 st of December.
There was no snow on the ground but it was cold enough for it. Perfect conditions for a run around a
mucky field. Eight of our juveniles were eligible to run for the Munster B’s and it’s great to report
that they all ran really well on the day.
Oscar Cunningham and Adam O’Connor were first out in the under 9s and both finished in the top
50. Next up was Ciara Hayes in the under 11s. In a field of over 100 runners, Ciara finished in 13 th
spot., just missing out on an individual medal but I am glad to say that Ciara picked up a County
medal for Cork who came first overall in the team medals. Brilliant stuff!
Our under 11 boys were Ryan Whelan, Tadgh Walsh and James O’Connor. Again, all of our lads
finished in the top half of the field of 103 runners. Ryan had a super finish, picking up an individual
medal finishing in 11 th place. Ryan also picked up a County team gold for Cork. Congratulations, Ryan.
Well deserved!
As usual, Ellie Barry and Ella O’Connor took their place at the start line for the under 13 race and
they duly put in a strong performance.
Last but not least, Darragh Ronayne put in a sterling performance in his under 13 boys race and
finished a strong 7 th place and besides his individual medal, also picked up a County gold medal for
his beloved Cork. Great going, Darragh!
Well done to all of our athletes and coaches for their great performances and to the families for the
great support.
Next Sunday, the 8 th of December is our second East Cork Cross Country Championships, to be held
in Carrignavar. Our club had a very successful day out the first day and we are confident that lots of
our club athletes will turn up and have a brilliant day out again.

Well done to all who took part in this years annual Christmas 3km in aid of St Vincent de Paul. We had 75 finishers overall and raised a whopping €700 for SVP at this important time of year. Many thanks to all for your generous contributions, and great running!! Results below:

St Catherine’s AC annual Christmas 3km in aid of St Vincent de Paul takes place this Tuesday in Conna sports field – race starts at 7:30pm. All race entry donations go to SVP at this important time of year. Come along and join in and enjoy a cup of tea and a biscuit after the race! 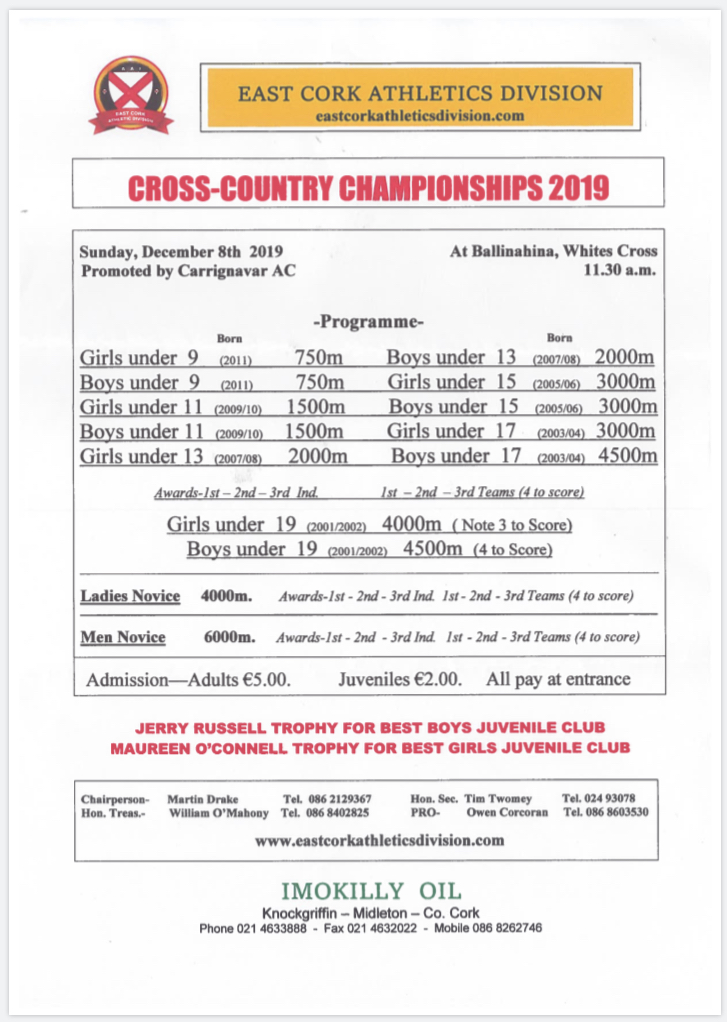 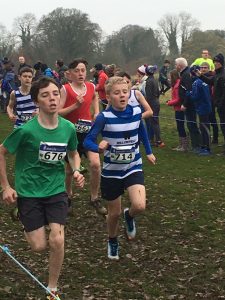